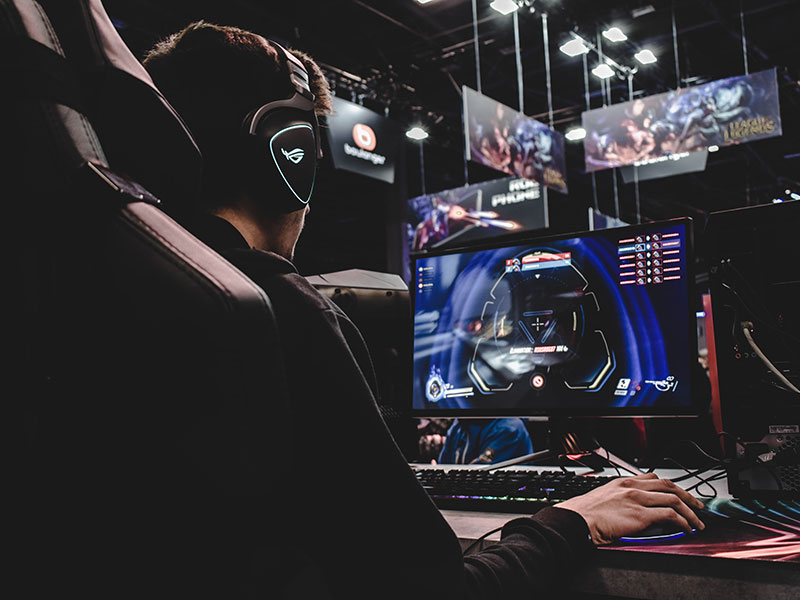 University Esports competitions are becoming highly popular. As of July 2019, more than 150 colleges and universities were members of the National Association of College Esports (NACE). Streaming these events to students and the public can be done many ways. Three of those methods will be discussed here and will be ranked by cost: the Personal/Basic plan; the Intermediate plan and the Advanced plan. Because Esports events all use high-end Gaming computers, we will assume that those devices already exist at your school and they will not be included in the cost estimates.

1.1 This plan is the lowest cost solution, using a webcam and a live broadcast platform such as Twitch, YouTube Live, Facebook, etc. The cost is very low.

1.2 The disadvantage of this solution is webcams are generally not very good, and the quality of the live broadcast picture will be poor. Additionally, a webcam only allows for one viewing angle. Without other elements of video production, the stream will not be very interesting and will make it difficult to attract an audience.

1.3 This solution is more suitable for personal live broadcast where a student is transmitting his or her Esports match to a limited audience, or in a Training room where competitors are learning the game. For group matches or large-scale matches where multiple players are being shown to the audience, an intermediate or high-end solution will be required.
2. Intermediate Plan (Budget: 5,000- 25,000 USD)
2.1 This plan utilizes special software and is a moderate cost solution. The required equipment is a computer system (a minimum of two: see below), one to multiple professional cameras, wired or wireless microphones, broadcaster software encoder, and a live streaming platform such as those mentioned above.

2.1.1 In addition to the game computer(s), two other computers will be used: an “Observer” PC, which is used for observing and selecting player screens for the broadcast, and a Producer computer dedicated to the live broadcast software.

2.1.2 Professional Camera: One or more cameras will be used according to your functional requirements. Varying views of the players can be achieved with a fixed-position PTZ (pan-tilt-zoom) camera or a shoulder-mounted broadcast camera. Views that will not be changed, such as wide-angle shots of all players, can be managed via Box cameras (also known as Point of View cameras).

2.1.3 Microphones: Each player will use a hands-free microphone, usually part of a quality headphone set. Live hosts and producers will also use microphones, which may be wired or wireless. Multiple microphones are managed through the use of a microphone mixer located at the producer station.

2.1.5 Live streaming Platform: Popular streaming platforms such as Twitch (a live video gaming website), YouTube and Facebook are often used; some schools have their own live TV channels or servers for transmitting campus events to students and the public.

2.2 This solution offers the advantage of easy installation. Because most functions are achieved via computers, installation is generally do-it-yourself. The moderate cost allows schools to broadcast Esports on a limited budget; broadcasting software is relatively cheap compared to hardware devices. The software options allow users to make broadcasts more interesting via special effects, switching and subtitles. And, because this is a software solution, the operation interface is easily customized for users.

2.3 The disadvantage of this solution is that the equipment is often used for other functions between Esports events. The software may need to be reset before each use; video and audio sources may have to be located and re-connected, and the system must be thoroughly tested prior to each broadcast. Software updates – which often happen at the worst possible times - and compatibility with other computer systems are also a common problem encountered by users. In addition, the stability of the software is dependent on the computer system, especially when there are a large number of inputs from live video and audio sources. If the computers are used for other purposes between events, hard disk capacity will be affected. Finally, any software-based platform is subject to network security problems.

3.1.1 Computer system: One or more “Observer” PCs will be used for monitoring and selecting player screens during the broadcast. These computers will be connected to the video switcher or media encoding hardware (see below).

3.1.4 Production switcher: Due to the large numbers of audio and video channels that may be in use, a hardware solution is required rather than a software platform. Depending on the number of cameras, more than 20 inputs may be needed. Professional grade video switchers are employed for the larger installations. Some media processors are also able to handle switching of multiple sources, split screen effects, subtitles, recording, and more.

3.1.5 Hardware live encoder: This equipment is able to manage multiple inputs; some encoders are built into specialized media processors which as noted above, offer special effects and switching functions as well as preparing the program for the broadcast or streaming platform.

3.1.6 Live broadcast platform: as with the mid-level plan, a streaming platform such as Twitch, YouTube or Facebook is often used, although colleges and universities that have large Esports facilities will frequently have their own broadcast TV channel or streaming service.

3.2 This solution has several benefits including high quality, interesting video production, a permanent installation that does not need to be set up each time, and ease of use. Because each device is dedicated to a specific function, quality and stability will remain consistent and the live broadcast workflow becomes a repeatable and automated process.

3.3 The disadvantage of this solution is that the price is not cheap. In addition to the increased hardware costs, a professional system integrator will be needed to manage wiring, cabling, and issues with device compatibility.
4. Choosing the best option

4.1 In addition to the differences between personal live broadcasts and competition live broadcasts, you can use the following comparison table to select the most suitable plan for your Esports program. A software solution will be suitable for some functions while hardware will be required for others. Ultimately, it depends on the type of facility that will be used and the planned complexity of the production. 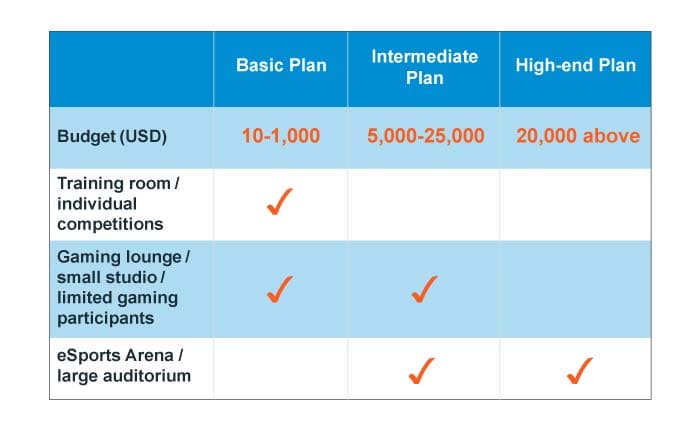