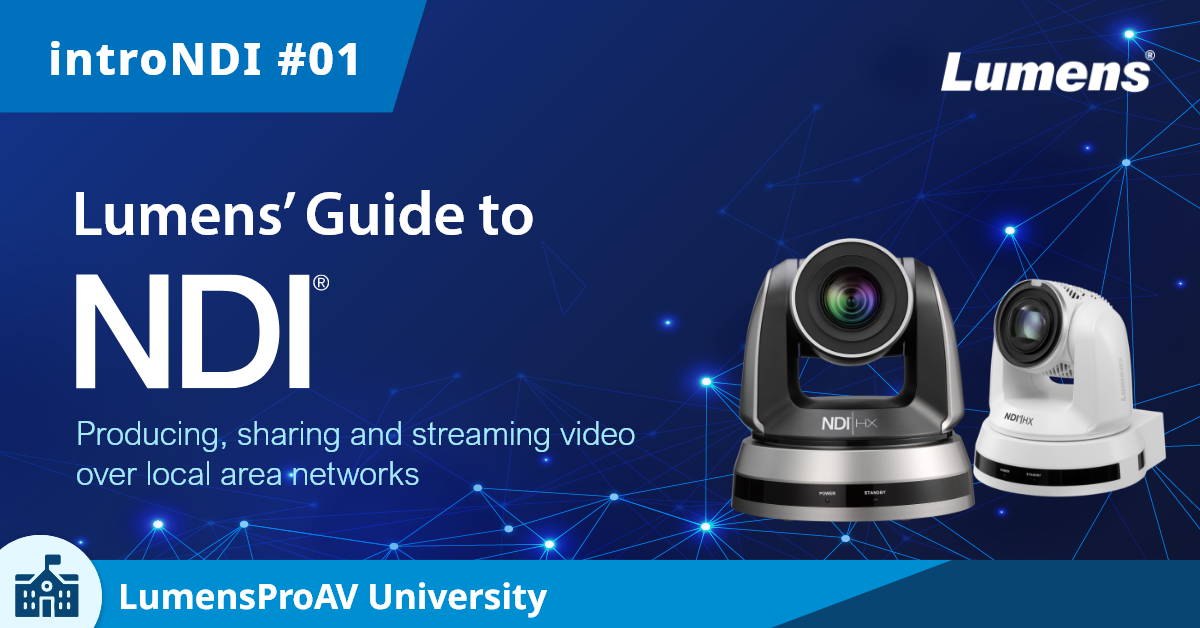 Newtek’s NDI format is maturing like a fine wine. Initially, it was simply a way to replace HDMI and SDI cables between cameras and the switcher. Then other parts of the production – recorders, multiviewers and editing systems - entered the NDI world. Once NDI converters arrived on the scene, virtually any video equipment, AV source, or display could be added to the NDI network. Now NDI is widely used in live video production, broadcast workflows, events, and post production. Entire facilities are now wired by Ethernet cables instead of SDI, DVI, and HDMI.

Why deploy NDI instead of SDI or HDMI?

NDI uses standard IT networking technology (including already installed routers, switchers, and Cat5/6 Ethernet cabling) to transport HD and 4K video signals. This holds out the promise of low-cost infrastructures, cost-effective cabling, and plug and play rollout of new hardware whenever required.

Running on Ethernet networks has two other advantages over SDI, DVI, and HDMI. First, the equipment can be designed to operate on a single Cat5e or Cat6 cable. This cable can deliver power to the unit (PoE), dramatically cutting installation times compared with plugging in additional electrical adapters. The second benefit is the two-way nature of IT infrastructures. Typically, a device such as a PTZ camera would be connected to a video cable (HDMI or SDI) and a separate control wire. Now with NDI, video, audio, control and power are all routed over a single network cable.

Can NDI share the same network as our IT systems?

Yes. NDI can co-exist with standard Ethernet networks without any issue. However, there is a limit to how much data any network can support. With a full NDI channel running at 125Mb/s, a Gigabit network could become saturated by 5 or more streams. Many organizations, therefore, opt for a dedicated 1GbE network or upgrade to a 10GbE infrastructure.

Can I control cameras over NDI networks?

With NDI Studio Monitor, all NDI PTZ cameras found on the network can be previewed and controlled using a PC or Mac. Change the position, zoom, auto-focus or trigger presets with simple commands on a keyboard. There’s another clever feature of NDI Studio Monitor. Connect a Smartphone or tablet’s web-browser to NDI Studio Monitor in order to control cameras wirelessly. It’s easy to set up and gives you the versatility to use a familiar iOS, Chrome OS or Android device to manage all your NDI cameras.

Can I control NDI PTZ cameras using a hardware controller?

With Lumens VS-KB30, as many as 255 NDI PTZ cameras can be controlled over the network. With PoE support, there’s not even any need for a separate power supply; one Ethernet cable does it all.

While NDI uses the DCT codec for visually lossless compression, NDI|HX employs H.264 encoding to greatly reduce file sizes and the required bandwidth. For many, NDI|HX is a way of avoiding the need to upgrade your network to 10GbE. There are two catches: first, the encoding process introduces a small amount of latency (delay) which is usually less than one frame. The second is that compression has an impact on video quality. To most eyes, there is no difference; on the big screen, cinephiles may prefer full NDI pictures.

Because of these factors, NDI|HX is extremely popular. It gives AV managers and live event producers a low-cost, easily managed, and highly scalable video network. Users can add PTZ cameras, box cameras, recorders, graphics systems, and players at will. Multiple devices connected to the network are instantly recognized and available for use immediately.

What’s the difference between NDI|HX and NDI|HX2

NDI|HX2 is a major advance. NDI|HX has always performed well on lower bandwidth networks. Now NDI|HX2 makes that even easier, generating streams that are up-to half the size of HX1 versions. It does this by giving users the option for HEVC (H.265) compression to produce the same very high-quality video at much lower bitrates, or better video quality at the same bitrate.

There is one drawback: HEVC is a complex codec and requires more processing power within cameras, switchers, and other equipment to handle the process. The latest generation of computers and video hardware (such as Lumens VC-A71PN) can manage multiple streams of HEVC; older equipment may not have the ability to support HX2, especially in 4K.

NDI|HX uses the ever-popular H.264 codec (it’s used by virtually every tablet, smartphone, DVD player, and smart TV). NDI|HX2 adds the option of HEVC encoding. Both deliver high quality compression at low bandwidths. What this means is that both flavors of NDI|HX (and especially HX2) can be delivered over wireless networks. Connecting PTZ cameras to Wi-Fi adapters enables producers to position units with freedom. Encoding to HEVC reduces the bandwidth required (compared with H.264) by up-to 50% meaning that even 4K NDI|HX signals can be sent over standard wireless connections.

Beyond the camera: how to deploy an NDI production system.

NDI is supported by AV and broadcast manufacturers across the world. With the advent of mini converters and NDI bridging units, virtually any SDI or HDMI device can be discovered on an NDI network. Native NDI products include:

As NDI leverages IT infrastructures, it’s important to remember that a PC or Mac running computer software forms an important part in the NDI workflow. Newtek offers customers (at no cost) some very powerful apps including:

Each tool gives AV technicians and system administrators the ability to monitor, secure, or extend NDI sources and networks. For producers, these apps add new creative options to help deliver even more engaging video communications, bring in remote guests and use a wide variety of live and pre-recorded media sources.

Producers working with SDI or HDMI signals always have been able to do all of these things, but only with additional I/O interfaces, converters or dedicated external hardware. Now with NDI, video streams are available network-wide and can be accessed at any network access point using any PC, Mac, or even an iPad. The set up is fast, the investment is far lower and there’s (theoretically) no limit to how much you can scale and expand your production network.

How can we switch a multicam NDI production?

As well as Newtek’s toolbox of apps, there is a growing array of live production software that supports NDI production, including Telestream Wirecast, mimoLIVE, NewBlue Vividcast, OBS Broadcast Studio, and Vmix. For many customers, Newtek’s Tricaster range offers a very tempting production platform. All these tools are very powerful, highly creative and fully featured, and easy to use, especially when paired with dedicated hardware controllers from the likes of Elgato and Skaarhoj.

NDI applications are typically designed to be scalable. Load OBS Studio onto a laptop and there’s virtually no limit to the number of video inputs, remote contributors, graphics effects, title layers, and audio channels it can support. As long as your computer platform has the processing power to cope and sufficient bandwidth is available on the network, it’s possible to replace SDI switchers, graphics systems, recorders, and players with NDI-based tools.

Besides data management, another concern for IT teams is data security. NDI was developed by Newtek for broadcast and production workflows. Within a TV station or video studio, securing video feeds is rarely a concern. However, where video is transported around a corporate company, school, college, town hall, courtroom, or hospital, privacy is a major issue. This became even problematic when video conferencing platforms such as Teams and Zoom began to accept NDI cameras as webcams. Now, without tight security, every live webcam on the network could be monitored by any and every user. For patient confidentiality, financial security, and HR privacy, this raises very serious concerns.

There are different ways to secure NDI streams. Firstly, IT administrators can set up a VLAN. A VLAN allows network managers to restrict and isolate parts of the local area network, authorizing only specified groups of users to access particular LAN segments. This means that sensitive video feeds can be run on the same physical infrastructure as the computer network, with access limited, for example, to AV teams.

While the VLAN delivers a certain level of security, Newtek’s NDI Access Manager (part of NDI Tools) goes further. It subdivides video sources and NDI devices into groups, each with defined user access rights. This gives administrators granular control over device access and control. NDI Access Manager is a free tool from Newtek and has been a game changer in securing production and AV networks.

Lumens NDI PTZ technology is compatible with the latest Newtek tools and formats, including NDI|HX2 and NDI Tools v5.